Database on Terrorism in Germany: Right-Wing Extremism and Jihadism

One of the core GIRDS projects is the ‘Database on Terrorism in Germany’ (DTG) currently available for right-wing extremism’ (DTGrwx) and Jihadism (DTG-JI). As the most comprehensive collection of qualitative and quantitative data regarding German right-wing and Jihadist terrorism so far the project allows for unique research opportunities to analyze right-wing extremist forms of political violence and terrorism. Originally the database started as a private research project and is continuously updated. It collected as much scientifically accessible information as possible such as court verdicts, autobiographies of former terrorists, media reports, interviews with victims and perpetrators, and publications within the radical milieus.

Currently the database on right-wing terrorism in Germany contains information on:

Of course not all incidents can be analyzed as terrorist offences. Nevertheless the DTGrwx allows for an in-depth study of right-wing political violence. In consequence the collection will be the basis for a series of academic publications and research projects.

In October 2016 the currently most extensive study on right-wing terrorism in Germany was published by Routledge, which is largely based on the the DTG dataset and includes a full list of the analyzed groups and actors. The book can be ordered here or by clicking on the cover below. 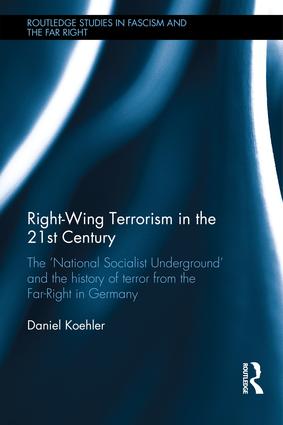 Additional academic publications based on our database are:

Koehler, Daniel; Right-Wing Extremism and Terrorism in Europe. Current Developments and Issues for the Future. In: PRISM Vol. 6, No. 2, pp.: 84-104

Koehler, Daniel; Right-Wing Terrorism in Germany and Beyond. In: ISN Security Watch, May 2015, published online

Due to lack of funding the DTGrwx is currently not available for online based search and access. Interested researchers and journalists may nevertheless contact us to inquire about possible options for project based cooperation. Please send a message to contact[at]girds.org.

In addition to the Database on Terrorism in Germany (DTG) for right-wing extremism we have now completed the first dataset analysis for Jihadist terrorism in Germany (DTG-JI). Our current dataset includes 54 Jihadist terrorist plots and attacks on German soil since 2001 that caused a total of 14 casualties. We only included those plots and attacks that were directed against Germany and hatched from within the country. We excluded those plots that were directed against other countries or individuals outside of Germany (even if the plot originated in Germany), as well as ‘membership’ crimes (i.e. membership in a foreign terrorist organization like ISIL), if the charges did not also include plotting, preparing or conducting a terrorist attack. We also excluded those plots against Germany being made from another country, if the plot did not lead to an attack on German soil, for the lack of information. Like for our DTGrwx dataset we used a wide collection of information sources, such as court documents, verdicts, press articles, intelligence reports and interviews with formers.

We will continuously update the dataset whenever new plots or attacks happen. Currently, we work on preparing an analytical report about the main characteristics of Jihadist terrorism in Germany for publication. Due to a lack of funding we are currently not able to provide a full online based and searchable database.

For any inquiries about the dataset please reach out to us via contact[at]girds.org.